The Taste of Karnataka
The culinary fare offered by Karnataka is quite varied with each region of the state having its own unique flavors. Many factors and influences have contributed to enrich this culinary heritage. Karnataka is also known as the coffee-bowl of India. It is the spice country which produces the best cardamoms, fondly called the queen of spices or gold and black pepper.
Karnataka's culinary culture revolves round three staple items – rice, ragi and jowar. However, the people in the northern districts have a preference for wheat and jowar rotis (unleavened bread made of millet) eaten with spiced vegetable preparations. In rural Karnataka, ragi is widely used with each meal. This staple grain is steam cooked and rolled into balls the size of cricket balls and served with hot chutney or huli (a cousin of sambhar).
The Kodavas or Coorgis, who are culturally quite different from the rest of the state, have an equally distinct cuisine. They are perhaps the only Hindus who serve non-vegetarian food and alcoholic drinks for their marriage ceremonies and traditional festivities. Most of the Coorgi curries—noted for their flavor and taste—are coconut based, lightly spiced and moderately sour.
The coastal cuisine of Karnataka is as delightful as that of Coorg. Fish and seafood are available in plenty and since the majority are fisher-folk, the cuisine is simple, yet flavorsome.

KARNATAKA SPECIALITIES :
A typical Karnatka meal has many delicacies like Kosambari, a salad made of the broken halves of the soaked green moong dal (lentil) minus its skin, spiced with salt, green chili and mustard seed (oggarane) and mixed with tiny scrapings of coconut, cucumber and carrot and dressed with a little lime juice. Then there are the playas which are vegetables steamed or boiled to retain the original color and flavor. Sometimes, huli is replaced with a milder kootu. Tamarind is taboo for kootu, which is spiced with lots of pepper, cumin seeds and ground coconut. Also, no Kannada meal is complete without saaru-a clear pepper broth.
Other popular Karnatka specialties are bisi bele huli anna, which is created out of rice, dal, tamarind, chili powder, and cinnamon, the gojju-a vegetable, most popularly bitter gourd, cooked in tamarind juice and jaggery with chili powder in it, chitranna-rice with the juice of lime, green chili and turmeric powder and sprinkled with fried groundnuts and coriander leaves, and Majjige huli with tovve which has vegetables in a buttermilk base. Breakfast foods in Karnatka include the popular uppittu (upma in Tamil) made of roasted semolina and laced with chilies, coriander leaves, mustard and jeera (cumin seed). Karnatka's exclusive dosai served in some restaurants catering to the middle class is the famous set or a pile of four dosais served on a banana leaf, and topped with coconut chutney, potatoes, and two small pats of butter.
Kesari bhath (a halwa made of semolina, sugar, and saffron), chiroti and Mysore pak are among the favorite sweets in Karnatka. But the piece de resistance is the obbattu or holigea-flat, thin, wafer-like chappati filled with a mixture of jaggery, coconut and sugar and fried gently on a skillet. Along with payasa (south Indian kheer), obbattu is always served with celebratory meals in Karnatka. Other delectable sweets that come out of the Kannada kitchen are the shavige payasa made of vermicelli and sugar, hesaru bele made with green gram dal, and baadami hallu, which is, crushed almonds mixed with milk, sugar and saffron.
Isnt all this mouthwatering? Well here I tried "Bisi Bele Huli Anna" 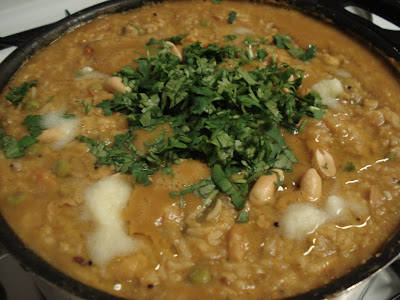 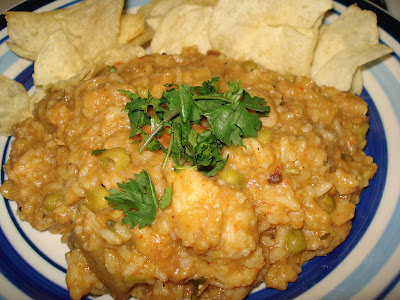 Method :
Roast all the ingredients of the spice mix in a little oil. Cool and then dry grind. Keep aside.
Soak the tamarind ball in some hot water and extract the juice. Keep aside.
Cook the rice and the tuvar dhal in the rice cooker or pressure cooker.
In a big thick bottomed pan add some ghee/oil. Add the chana dhal,jeera and mustard seeds to it. When the chana dhal, jeera turns golden and mustard splutters add the onion and saute till tender. Now add the rest of the vegetable and cook. Now add in the turmeric pwder, salt, chilli powder and garam masala and cook till the vegetables cook well.Add the roasted peanuts to this and mix well.
Now, add the cooked rice and dhal mixture, tamarind juice / tamarind paste, and salt. mix well. Now add the roasted masala powder. Add 3-4 glasses of water to this and keep on lowand cook well. This rice shouldnt be very thick, it should be a bit semi liquid. The consistency of the recipe matters a lot.
Add the ghee (clarified butter) to this rice as a topping. Allow to simmer on a low flame stirring continuously for 15 minutes till the rice is fully cooked and all the ghee (clarified butter) is used up. Garnish with fried cashewnuts and coriander leaves just before serving. 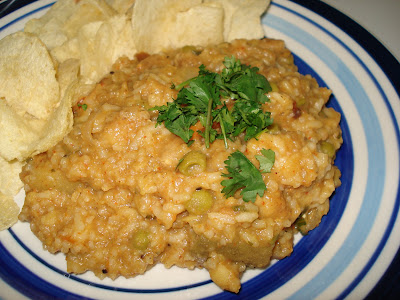 Serve hot with Potato chips and raita
Posted by Shubha Ravikoti at 8:00 PM

Shubha, just checked my mail girl, sorry I took so long!:))
Thanks for the entry, looks absolutely wondeful and authentin.
See you at the round up.Good that you sent this to me, I never knew this blog existed!I will add to my blog roll!:))

Hi shubha
This is all my favorite in karnatka cuisine!!U have lot of wonderful recipes.I am going to try ur bread upma and the bread and Parmesan slices for the kids!!will tell u once i made them!!

Hi shuba! first time here! You have a lovely blog with neat recipes! Nice entry for RCI Karnataka!
Welcome to blogosphere!:))Me too including you in the blogroll!

Looking for Something?? Search Here

My recipes & Updates in ur Inbox

Look into My Blog

Chutki bhar pyar by Shubha Iyer is licensed under a Creative Commons Attribution-Noncommercial-No Derivative Works 3.0 United States License.
Based on a work at Chutkibharpyar.blogspot.com.
Permissions beyond the scope of this license may be available at No Copying of pictures and contents.

Please no copying... Ask if u need anything

Just about food... Agregators and Others

What's up in Blog Catalog.

I am a Great Cooks Member

Blogs that Inspire me

Other than food blogs